What is V-2-V communication?  Vehicle-to-vehicle communication.  That’s right, your car will be “talking” to the cars all around it in an effort to avoid crashes and alert drivers of issues. 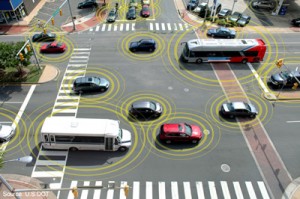 Studies have found that the V-2-V communication can address many of the crashes involving two or more vehicles.  The application of the technology has shown benefits in real-world and controlled test conditions. “Vehicle-to-vehicle technology represents the next generation of auto safety improvements, building on the life-saving achievements we’ve already seen with safety belts and air bags, ” said U.S. Transportation Secretary Anthony Foxx. “By helping drivers avoid crashes, this technology will play a key role in improving the way people get where they need to go while ensuring that the U.S. remains the leader in the global automotive industry.”

The U.S. Department of Transportation (US DOT) and the National Highway Traffic Safety Administration (NHTSA) announced that they will begin to take the necessary steps to enable vehicle-to-vehicle communication technology for lighter vehicles.

V-2-V communications will provide the vehicle and the driver with a 360 degree situational awareness.  It will allow cars to exchange information such as speed and position ten times per second.  The technology will allow the vehicle to determine if a risk exists and then alert the driver.  It will include information to allow a driver to decide if it is safe to pass on a two lane road, make a left turn across oncoming traffic or of an impending danger of a car approaching an intersection.  The technology will allow vehicles and drivers to detect dangers that are potentially hundreds of yards away.

The technology will not transmit any identifying information about the vehicles or drivers, only basic information about speed and locations.  In addition, the vehicles themselves will not be programed to take an evasive action such as steering maneuvers or braking, at this time.  Eventually, NHTSA hopes to initiate actions to have technology integrated into vehicles that will use on-board sensors that will prompt vehicles to take action.  This technology would be blended with the V-2-V communications technology.