Each year the US Coast Guard releases a study on recreational boating statistics for registrations, accidents, deaths and injuries.  With summer approaching, more and more families are likely to take part in recreational boating activities.  The Coast Guard reports that March and April, 2012 were the months with the highest percentage of fatal accidents.  And, Texas was reported as the 3rd highest percentage of deaths behind only Florida and California.

March and April, 2012 were reported as the months with the highest percentage of fatal accidents.  June, July and August, 2012 had the most reported non-fatal accidents.

Age of the Victim and Types of Injuries

In 2012, the most injuries were reported to individuals between 20 and 29 years old. 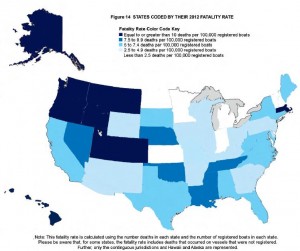 Children between 13 and 19 years old were a close second.  Of the 3,000 reported injuries, almost half were lacerations or broken bones.

The Coast Guard reported that there were 578 fatal accidents in 2012.  Texas had 32 fatal accidents, 23 of which were a result of drowning.  This was the third highest number of deaths in the country behind only Florida and California.  And, based upon the number of boat registrations in Texas is 5.5 deaths per 100,000 boats registered.

Leading Factors to Injuries and Deaths

Of the 4,515 accidents that occurred in 2012, the top three primary factors contributing to

Many people enjoy recreational boating activities without using life jackets, especially for children.  It is recommended that everyone wear a life jackets while boating and is required 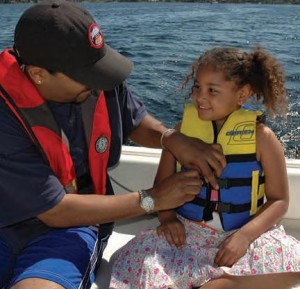 In 2012, almost 71% of all fatal boating accident victims drowned, and of these 85% were reported as not wearing a life vest.  Specifically as to children, 42 children under the age of 13 lost their lives while boating.  Of these 42 children, 42% (or 10 of the children) died of drowning.  And, of the 10 children who died of drowning 8 of them were not wearing a life vest.

What to Take Away From These Statistics?

Recreational boating can be a fun activity for everyone involved, but as with any activity, safety must be paramount.  The dangers of being out on the water are real.  Life jackets, attentive drivers and passengers and responsible consumption of alcohol are all important.  It is also especially important to take safety precautions with children and be attentive to their actions in and around water and boating.