The Food and Drug administration recently announced that it will investigate the diabetes drug, Saxagliptin to determine if patients have an increased risk of heart failure while using 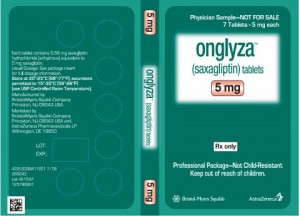 the drug.  Saxagliptin is marketed under the brand names Onglyza and Kombiglyze XR, and is a relatively new diabetes medication that boosts the amount of insulin that the body produces after each meal, when blood sugar is high.

A study published last September in the New England Journal of Medicine reported an increased rate of hospitalization for heart failure in patients who took Saxagliptin.  The NEJM study did not find that Saxagliptin increased or decrease the rate of heart attack or stroke but did show an increase in hospitalization for heart failure.  Study chairman, Dr. Eugene Braunwald, said this finding was “not expected and deserves further study.”  Although Saxagliptin improves glycemic control, other approaches are necessary to reduce cardiovascular risks.

The FDA said the investigation into Saxagliptin, “is part of a broader evaluation of all type 2 diabetes drug therapies and cardiovascular risk.”  The FDA advised that patients should not stop taking Saxagliptin and should speak with their health care professionals regarding any questions or concerns. The FDA has requested clinical data from the manufacturer and expects that data to be submitted in early March, 2014.  Once the data is submitted, the FDA will conduct a thorough analysis and report their findings publicly.

Issues surrounding the safety of type 2 diabetes drugs gained prominence after a study found that another diabetes drug, Avandia, was reported to increase the risk of heart attack by 43%.   Diabetes patients should speak with their doctor regarding cardiovascular risks associated with type 2 diabetes drugs.  Patients and healthcare providers are encouraged by the FDA to report side effects involving Saxagliptin products to the FDA Medwatch program.