In 1994, the North American Free Trade Agreement (NAFTA) went into effect with the goal of increasing trade between the United States, Mexico and Canada.  Part of NAFTA included opening up the border to Mexican and American trucks traveling to the opposite country for deliveries.  In 2007, a pilot program was started, but was defunded by Congress in 2009.  A new pilot program was agreed to by the US and Mexico in April, 2011.  The first Mexican trucks with long-haul operating authority in the US crossed the border in October, 2011.

Where are Mexican trucks going?

As of December 2013, 14 Mexican domiciled motor carriers have been given active long-haul operating authority by the Federal Motor Carrier Safety Administration (FMCSA) to operate in 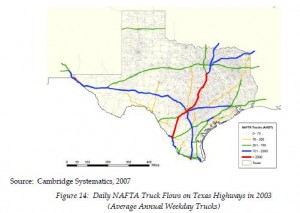 the United States.  These 14 carriers have made approximately 10,000 border crossings since October 2011.  83% of the US miles driven by these carriers have been in US border states and overwhelmingly in Texas and California.  Most trucks are not traveling past the border states because of the comparatively high cost of long transportation by truck vs. rail or ocean shipping.

Mexican motor carriers who want to obtain long-haul authority through the FMCSA to transport goods into the US, must complete a three stage process.  The first stage is a pre-authorization safety audit which includes checking the carrier’s records for driver’s drug and alcohol testing, hours-of-service compliance, Mexican commercial driver’s licenses, testing each driver’s proficiency in English, inspecting each vehicle that will be participating in the program and the ensuring the carrier’s ability to obtain US insurance.   During this stage, the drivers and trucks are inspected each time they enter the US for at three months.

The second stage includes continued monitoring by the FMCSA of the carrier’s safety performance and a compliance review by the FMCSA in the first 18 months of operation in the US.  If the Mexican carrier receives a satisfactory rating and has no pending enforcement or safety improvement actions, the carrier is given permanent operating authority.  The carrier then is put into stage three of the pilot program which requires the Mexican motor carrier to continue to comply with all FMCSA safety regulations and to renew its safety inspection of vehicles every 90 days for the remainder of the 3 year pilot program.  At the end of the three year pilot program, in October 2014, the carrier can then change to a standard permanent authority similar to that given to US motor carriers.

The FMCSA estimated that 4,100 inspections of Mexican trucks would be needed during this 3 year pilot program to have sufficient data to validate the results of the three stage process.  As of December 1, 2013, the FMCSA had conducted 4,115 inspections of trucks participating in the pilot program.  The problem lies in that 2 motor carries account for 85% of the 4,115 inspections completed.  This raises the obvious question of whether the data collected will be statistically representative to evaluate the program.

The FMCSA is using the same parameters to measure the safety of the Mexican motor carriers as it uses for US carriers – mainly the “out-of-service” rates for motor carrier’s vehicles and drivers based upon roadside inspections.  Out-of-service violations are problems severe enough to prevent a truck or driver from being allowed to continue the trip until the deficiency is repaired or addressed.  Of the 14 Mexican motor carriers with authority to operate in the US, all of them have similar or lower out-of-service ratings than US carriers.  Again, though, 85% of the inspections have been conducted on just two of these carriers.  It is unclear at this stage if this allows the FMCSA to have a statistically representative sample to make any clear determinations about the safety of Mexican trucks operated in the US.

The violations that are being found are serious and significant to safety on the roads – defective or missing axle parts, brake defects, cracked frames, inoperative signals, oil and grease leaks, non-working lights, windshield-wiper defects, tire-tread separation and brake compressor violations.  A Bloomberg article from September 26, 2013, reported that the Mexican motor carrier that has been inspected the most by the FMCSA had 44 violations in a single day, on July 31, 2013.  While there have not been any fatal crashes yet involving Mexican trucks, with violations such as these, it may just be a matter of time.

What this means for Texans and other border state residents?

First and foremost, it means increased trucking traffic on our highways and in our towns. 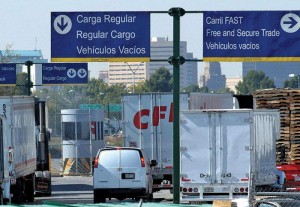 This only increases the risks of a crash or other major incident which may cause serious bodily harm or death to individuals in our families and/or communities.  And while inspections are being done on the vehicles and drivers crossing the border, serious violations are continuing to be found, even for those motor carriers who have been involved in the pilot program.

If you or a loved one has suffered serious injuries and/or death as a result of a truck crash, contact the Law Offices of John David Hart at 800-247-1623 or johnhart@hartlaw.com to discuss your legal rights.  We are experienced in helping individuals and families deal with the devastating effects of serious truck crashes on the lives of those involved and are dedicated to helping you during this difficult time.