The National Transportation Safety Board (“NTSB”) released its 2015 “Most Wanted List” of transportation safety improvements during the 94th annual meeting of the Transportation Research Board in Washington, D.C. The list represents the organization’s top advocacy priorities, designed to increase awareness and support for “the most critical changes needed to reduce transportation accidents and save lives.” Six issues return to the 2015 list from 2014, including “end[ing] substance impairment in transportation.” 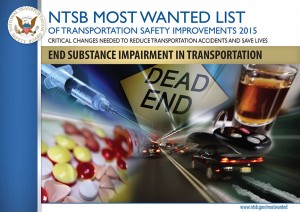 What is the issue?

According the NTSB, almost 160,000 people have died in motor vehicle crashes involving impaired drivers since 2010. Impairment of this kind can be caused by both drugs and alcohol. In 2012 alone, the National Highway Traffic Safety Administration (“NHTSA”) found that 10.3 million people reported driving under the influence of illicit drugs in the past year.

The NTSB has found that the problem of impairment is not limited to our nation’s highways, “Complex machinery such as cars, planes, trains, ships, and pipelines require operators to be at their best – not impaired by alcohol or drugs,” stated the organization’s website.

What can be done?

“Additional countermeasures include stronger impaired driving laws, increased use of high-visibility enforcement, expanded use of existing technology such as ignition interlocks and passive alcohol sensors, development of emerging in-vehicle technology such as the Driver Alcohol Detection System for Safety, and targeted measures for repeat offenders such as the use of DWI Courts,” stated the organization.

How does this impact you?

Each year, innocent victims are injured and killed in serious car and truck accidents caused by impaired drivers. Impaired drivers choose to put the lives of others at risk by operating motor vehicles while impaired by drugs, alcohol, or lack of sleep.

If you or a family member has been injured or lost a loved one as a result of a serious car or truck crash, please consider contacting John David Hart at 1-800-247-1623 or johnhart@hartlaw.com for a free consultation to discuss your legal rights.