The study evaluated national data for the past ten years regarding fatal crashes in which teen passengers, ages 13 – 17, were present at the time of the crash.  Researchers compared the patterns of novice drivers (ages 15-17) with those of young adult drivers (ages 18-24) to determine a relative risk index.

Researchers did not explore or try to find reason for the results.  They noted that the ten year period mirrored that period in which texting was a growing trend for teenagers.  The study also noted that lack of experience could be a factor.  And, the study suggested that one cause of fatal teen crashes could be the lack of development of the prefrontal cortex of the brain, where judgment and decision making activities are centered.   This portion of the brain is not fully developed until about age 25. 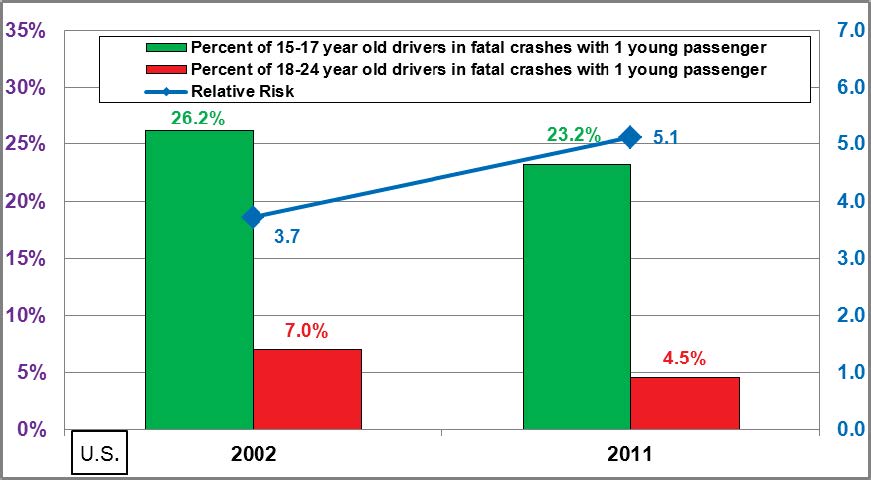 As a result of growing concerns over teen driving, many states, including Texas, have instituted graduated driver license laws (GDL laws).  The laws are designed to limit the risk for young drivers of crashes.  These laws vary by state.  Some states prohibit late night driving or limit the number of young passengers in the car with the teen driver. In Texas, drivers under the age of 18 cannot carry more than one passenger under the age of 21 for the first year of licensed driving, excluding family members.  Most states also prohibit young drivers from talking or texting on a cell phone while driving.  National research data though shows that a significant number of 16-17 year old drivers admit to talking and texting while driving.