On December 15, 2013, the Oil & Gas Journal published an article regarding the growing safety concerns presented by transporting oil by rail in the United States – a mode of transport increasingly used in the past few years. With the production of oil increasing at a substantial rate, the oil industry has had to find new means by which to transport this product. While railways do provide a viable and useful avenue for the transportation of oil throughout the United States, both the oil and rail industries must identify and address certain safety concerns implicated by this mode of transportation. 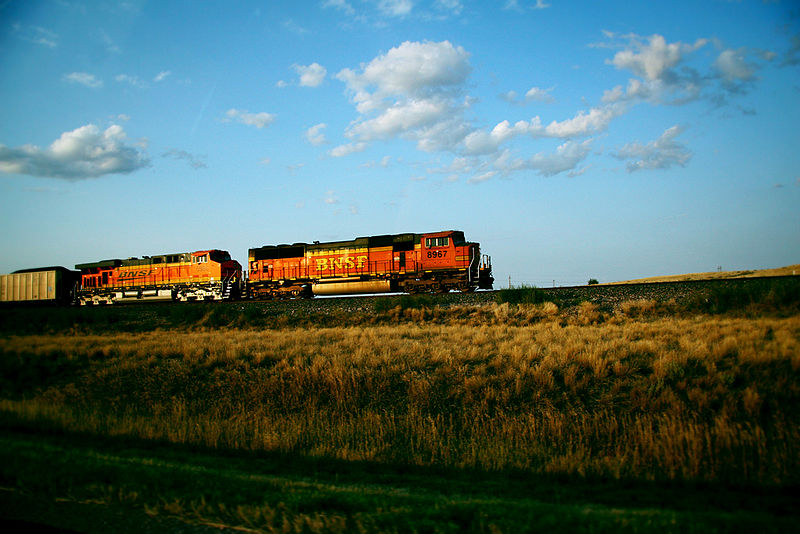 Increase of oil-transport needs in the United States

The need for further transportation options has increased as the production of oil in the United States has grown substantially within the past few years. According to data from the Association of American Railroads (ARA), the quantity of carloads of crude oil originating from U.S. railways increased from 9,500 in 2008 to almost 234,000 in 2012. According to estimates from the Oil & Gas Journal, the number of carloads of crude oil transported by major U.S. railroads will likely reach 400,000 in 2013. While the increase in oil is obviously beneficial to the country’s economy, the safety concerns presented by the same cannot be ignored. 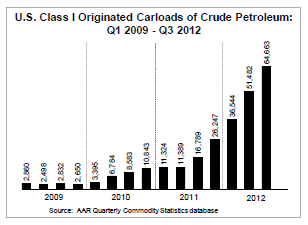 According to recent AAR data, there has been a substantial increase in the railway carloads of crude petroleum originating in the U.S. in the past few years, particularly with a significant increase in 2012 alone.

Railways as a viable alternative to the current pipeline infrastructure

Railways provide another means of transport that could help address the inadequacies presented by the current pipeline system. According to the Oil & Gas Journal, the crude oil produced in the United States must be transported from areas like the middle of the country to refineries on both the East and West Coasts. The current pipeline network was simply not designed to address these types of needs. 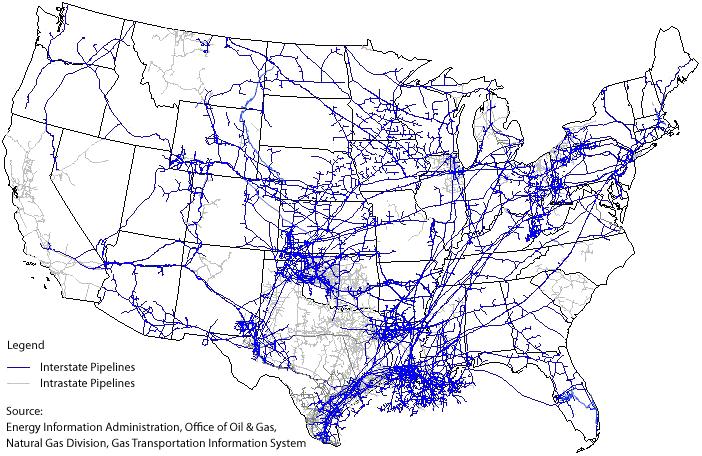 Map of pipeline system in the United States, showing a shortage of lines going to the West Coast

Safety concerns within the railroad industry

While the railroad industry presents a convenient method by which to transport oil throughout the United States, the industry has been plagued by accidents and injuries in the past. In 2012, fatal accidents on railroads occurred in Illinois and Maryland, with a fire involving hazardous material occurring in Ohio.

Railway accidents have also occurred in other oil-producing areas of North America. Earlier this year, a train that was carrying crude oil derailed in Quebec and led to an explosion that killed 47 people. The railroad industry, with the help of the oil industry, must work to prevent tragic incidents such as these if railways are to be a viable option for the transport of oil products.

Safety statistics within the railroad industry

Although affected by a number of accidents and incidents in the past, the railroad industry’s safety record has improved in the last decades. Indeed, from 1980 to 2012, the train accident rate decreased by 80%, according to data from the Association of American Railroads (ARA). Furthermore, since 2000, the train accident rate has decreased by 44%. While these statistics are encouraging, the railroad industry can and should do more to improve the safety of workers and the public alike.

The significant amounts of oil transported by rail present certain safety concerns that must be addressed. There is an increased risk for mechanical accidents arising from a liquid substance that can result in messes, if spilled, and more distressingly, in fires. Furthermore, when accidents involving railcars transporting oil do occur, there can be an increased spill risk associated with the same.

Addressing the safety concerns presented by transporting oil by rail

Both government and industry agencies alike have suggested initiatives to improve the safety of oil transportation by rail. For example, a 2008 law requires the use of a system known as positive train control (PTC). This system monitors trains by electronic means and can automatically slow or stop a train if it detects a hazard or if the train operator does not respond to a hazard properly. This system was designed to help in preventing derailments from excessive speed; collisions between trains; movements resulting from an erroneously placed track switch; and, unauthorized movements in construction zones.

Furthermore, the Association of American Railroads (ARA) has encouraged the U.S. Department of Transportation to impose tougher standards on safety equipment and the construction of tank cars. This initiative seeks to improve tank cars in an effort to lower the risk of spills in accidents. According to the ARA, approximately 78,000 of the 92,000 tank cars that currently transport flammable liquids would either have to be fixed or be taken out of service following these recommendations.

Government agencies are also addressing how rail safety is regularized in the United States. According to the Government Accountability Office (GAO), the Federal Railroad Administration (FRA) is facing challenges in addressing rail safety that could strain the agency’s budget and resources. These challenges include employing a sufficient number of inspectors in the field, regularizing the PTC system, and adjusting to the change in traffic flow.

Oil and rail industry response in the future

While the challenges presented in transporting oil by rail are significant, both the oil and rail industries should continue to work toward implementing safety initiatives that seek to decrease the risks posed by this type of transportation. In doing so, both industries can continue to grow, but more importantly, the safety of workers and the public alike will be addressed. Safety, after all, is of utmost importance.