According to Dr. Thomas Frieden, Centers for Disease Control and Prevention (CDC) Director, the role of the CDC “is to identify ways to prevent injury and death and rigorously check what works and what does not work.  For motorcycle safety, the research shows that universal helmet laws are the most effective way to reduce the number of deaths and traumatic brain injuries that result for crashes.”

What works to reduce deaths and traumatic brain injuries?

The CDC reports that the only scientifically proven method of reducing death and traumatic brain injuries in motorcycle crashes is universal helmet laws.  “Helmets are estimated to reduce the likelihood of death in a motorcycle crash by 37%.   The National Highway Traffic Safety Administration estimates that helmets saved the lives of 1,544 motorcycle riders in 2010 alone.”  In addition, helmets reduced the risk of head injury to riders in a crash by 69%.  CDC report, Motorcycle Safety.

Full faced helmets offer the most protection to riders and passengers.  Studies show that the impact point on helmets is mostly in the lower portion of the helmet which would cover the chin and mouth area of the person and the region of the helmet just above the face shield covering the forehead area.

The impact of universal helmet laws 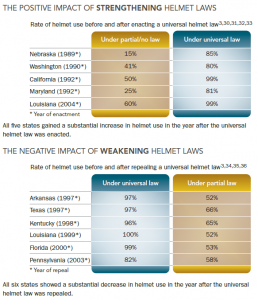 In 2010, 42% of motorcycle riders who were fatally injured were not wearing a helmet.  And, although helmets saved about 1,500 lives, it is estimated that another 700 could have been saved if the rider had been wearing a helmet.

During the first full year following the change in the helmet law in Texas, deaths rose 31% compared to the year prior.  Based upon a study by the Governors Highway Safety Association of death rates for motorcyclists in 2010 and 2011, Texas by far had the most deaths reported. 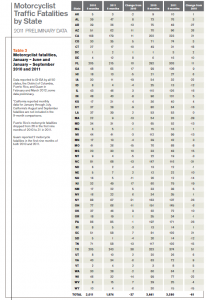