On January 13, 2015, the National Transportation Safety Board (“NTSB”) released its 2015 “Most Wanted List” of transportation safety improvements during the 94th annual meeting of the Transportation Research Board in Washington, D.C. The list featured six returning issues from 2014, including “disconnect[ing] from deadly distractions.”

The NTSB posts the list annually to raise awareness as to “critical changes needed to reduce transportation accidents and save lives.” As the list demonstrates, distracted driving remains one of those changes for 2015. 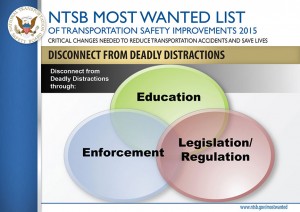 What is the issue?

According to the NTSB’s website, “distraction can take many forms.” This includes the use of portable electronic devices (“PEDs”) while operating a vehicle. “PEDs make it possible to connect to information anytime and anywhere,” stated the organization. “But when driving is not the time, and behind the wheel is not the place – nor is the cockpit, the bridge of a vessel, or at the controls of a train.”

Since 2003, the NTSB has found PED distraction as a cause or contributing factor in 11 accident investigations, which resulted in 259 people injured and 50 people killed. Further, the National Highway Traffic Safety Administration (“NHTSA”) reported that 3,328 were killed in distracted driving crashes in 2012 alone. According to the NHTSA, at any given moment in the day across the United States, approximately 660,000 drivers are using PEDs while driving. 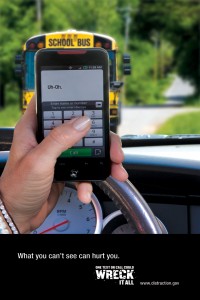 Campaign poster for the U.S. Department of Transportation and NHTSA’s efforts to stop texting and cell phone use behind the wheel; Image from www.distraction.gov

What can be done?

In December 2012, the NTSB called for a ban on all PED use while driving. Similar recommendations have been made for the operations in aviation, marine, and rail. “No call, no text, no update, is worth a human life,” said NTSB Chairman Deborah A.O. Herman. “It is time for all of us to stand up for safety by turning off electronic devices when driving.”

Distraction.gov  is one effort by the US Government to stop distracted driving. The website is sponsored by the U.S. Department of Transportation (“DOT”) and the NHTSA and features resources for learning more about distracted driving as an epidemic on American roadways. The website further encourages teens to “take the pledge” to commit to distraction-free driving.

According to the NTSB, only 14 states and the District of Columbia ban the use of hand-held cell phones while driving.  Ultimately, the organization feels “a cultural shift will be required” before we see a change in the statistics. “The data is clear; the time to act is now. How many more lives will be lost before we, as a society, change our attitudes about the deadliness of distractions?” Hersman said.

How does this impact you?

Distracted driving occurs when a driver engages in any activity that takes his or her visual, manual or cognitive attention away from driving. Distracted driving includes: eating, grooming, texting, talking on a cell phone, changing the radio, reading a map, or using a navigation system. Although Texas currently has no statewide law banning the use of cell phones while driving, drivers need to be aware of the dangers and make good choices to ensure their safety and the safety of others.  Drivers are encouraged to put electronic devices out of reach every time they get behind the wheel and speak up if they see a friend or family member texting while driving.

Almost half a million people are injured each year in distracted driving accidents. With more than three decades of experience representing victims of serious automobile and truck accidents, John David Hart has successfully recovered compensation on behalf of these victims.

If you or a family member has been injured or lost a loved one as a result of a serious automobile or truck accident, please consider contacting John David Hart at 1-800-247-1623 or johnhart@hartlaw.com for a free consultation to discuss your legal rights.