On October 8, 2013, Bloomberg published an article regarding the potential risks associated with robot-assisted surgeries, medical procedures that have been on the rise in the U.S. in recent years. Complications can include injury resulting from surgical error, instrumentation left inside the body and even death. The article also studies the aggressive marketing techniques used by Intuitive Surgical, a leading manufacturer of robotic surgical equipment, and how these marketing techniques have led to an increase in the use of robotic surgeries in U.S. hospitals.

What is robot-assisted surgery?

Robot-assisted surgery involves the use of a console situated several feet from the patient and controlled by the surgeon. The machine, which looks like a video-game console, provides a high-definition display of the surgery at hand. Controls on the machine allow the surgeon to move mechanical arms that carry tools used in the surgery. A three-dimensional camera that allows the doctor to see the work being done inside the patient helps guide the mechanical arms. 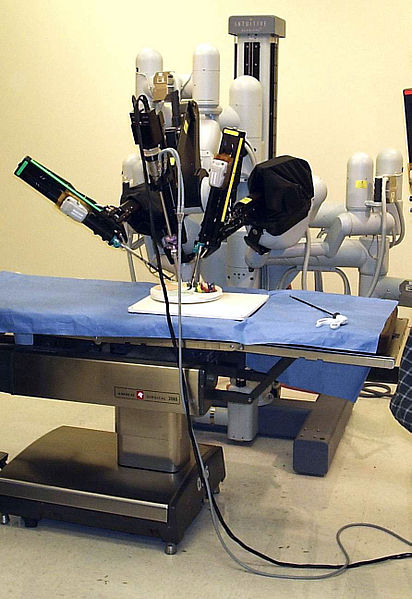 What are the common procedures where robotic surgery is used?

Rise of robot-assisted surgeries in the U.S.

According to the article, approximately 350,000 robotic surgeries were performed in the U.S. in 2012 alone. This is about a sixty-percent increase in the use of robot-assisted surgeries since 2010.

The increase in popularity of these types of surgeries can be attributed to aggressive marketing campaigns from manufacturers of robotic surgical equipment, such as Intuitive Surgical, Inc. By employing aggressive salespeople and utilizing deceptive marketing brochures, the company has contributed to the increase of these types of surgeries in the U.S.

In July 2013, following a company inspection, the U.S. Food and Drug Administration (FDA) sent a warning letter to Intuitive Surgical. The letter indicated that the company had done an improper job in reporting patient adverse reports and device corrections. Representatives from Intuitive Surgical continue to hold that the company has followed all regulatory guidelines.

The FDA has also scrutinized robot-assisted surgeries due to the more than 70 deaths that have been associated with these procedures since 2009. Furthermore, adverse event reports indicating injuries associated with robot-assisted surgeries more than doubled in the first eight months of 2013. This amount was more than double the amount of adverse events reported during the same time in 2012.