Xarelto (rivaroxaban) is a blood thinner (anticoagulant) manufactured by Janssen Pharmaceuticals, Inc., a pharmaceutical company of Johnson & Johnson. The drug is sold in an oral tablet format and was first approved for sale in the U.S. on July 1, 2011. Xarelto was initially indicated to treat prophylaxis of deep vein thrombosis (DVT), a condition which could lead to pulmonary embolism (PE), in patients who had undergone a hip or a knee replacement surgery.

In November 2012, the FDA approved a revision to Xarelto’s drug label to include the following two additional indications and usage: 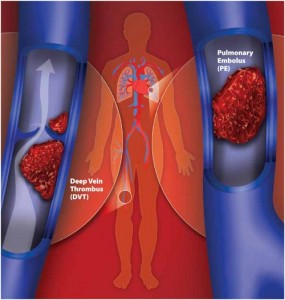 The drug can cause a number of serious and harmful health problems, including internal bleeding. What is perhaps most alarming is that, unlike with other blood thinners such as warfarin, no antidote exists to counteract bleeding that is caused by the use of Xarelto. Other serious side effects include spinal or epidural blood clots (hematomas) and an increased risk of stroke after the drug is discontinued in patients being treated for nonvalvular atrial fibrillation.

Research shows that of the hemorrhage events that were reported to the FDA as being associated to Xarelto, eight percent of these resulted in the death of the patient. This is approximately twice as high of a risk of hemorrhage-related death when taking Xarelto when compared to taking warfarin. 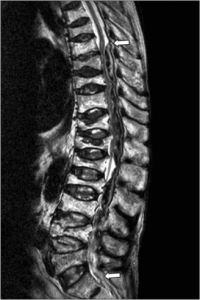 Top image is an illustration of a stroke; bottom image is an x-ray showing an epidural hematoma (Images obtained from National Institute of Health website)

Xarelto was marketed as an alternative to warfarin, a blood thinner that has been prescribed since 1956. Along with Pradaxa (dabigatran), Xarelto has presented an increase in adverse events reported to the FDA related to blood thinner medication. In fact, 1,080 adverse reports regarding Xarelto were submitted to the FDA from June 2011 to June 2012. Tragically, of the reported incidents, sixty-five deaths have been linked to the use of Xarelto.

According to the Institute for Safe Medication Practices’ most recent report, Xarelto (rivaroxaban) has now overtaken Pradaxa (dabigatran) in the number of prescriptions sold and in the number of adverse reports submitted to the FDA: 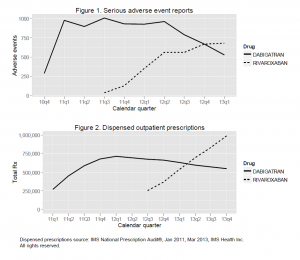 There are currently twenty-one pending cases in ten judicial districts throughout the U.S. regarding Xarelto. A hearing was held on December 4, 2014 before the United States Judicial Panel on Multidistrict Litigation to decide whether pending Xarelto lawsuits will be consolidated into a multi-district litigation (MDL). This type of consolidation allows for consistency in the rulings and efficacy for discovery matters.

Although Xarelto has not been recalled from the market, it is important that you visit with your doctor if you are currently taking this medication. If you or a loved one has suffered an injury as a resulting of taking Xarelto, please contact our firm at 1-800-247-1623 or johnhart@hartlaw.com for a free consultation to discuss your legal rights.